British reggae stalwarts UB40 are celebrating their 40th anniversary this year, and they'll be playing live at PNE Amphitheatre on Tuesday 27th August 2019! The group, who rose to fame in the 1980s with a bevvy of chilled out reggae hits like "Red Red Wine" and "Can't Help Falling in Love", will be performing from their beloved and extensive back catalog, as well as from their brand new album, For the Many! 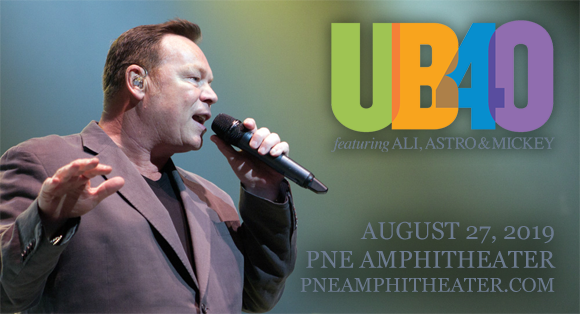 Formed in Birmingham, England in 1978, British reggae group UB40 are one of the most commercially successful reggae bands of all time, having sold over 70 million records worldwide. The group made its name in the 1980s alongside British ska bands like Madness and The Specials. They have charted more than 50 singles in the UK Singles Chart throughout their career, including international hits like their two Billboard Hot 100 number ones "Red Red Wine" and "Can't Help Falling in Love". Labour of Love (1983) and Promises and Lies (1993), their two most successful albums, reached number one on the UK Albums Chart, and the group holds a tied record with Madness for most weeks spent by a group in the UK singles chart during the 1980s, with 214 weeks each.