Iconic British punk rock star Billy Idol comes to PNE Amphitheatre on Saturday 31st August 2019! The legendary performer, who is soon to be honored with a star on the Hollywood Walk of Fame, will be performing songs from his hit-laden back-catalog, including "Mony Mony", "White Wedding", "Dancing With Myself", "Rebel Yell" and more! He'll be joined for this rock 'n' roll show by longtime collaborator Steve Stevens! 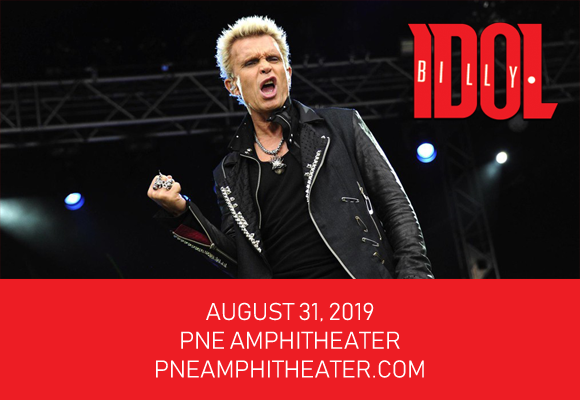 English musician, singer, songwriter, and actor Billy Idol emerged in London's 1970s punk rock scene as a member of the band Generation X. After finding success with the band in the UK, Idol moved to New York City in 1981 to embark upon a solo career alongside guitarist and songwriting partner Steve Stevens. The following year, Idol released his eponymous debut solo album, launching the singles "Dancing with Myself" and "White Wedding", both of which had music videos that found heavy rotation on MTV. Idol was soon established as part of the MTV-driven "Second British Invasion", with his second album, Rebel Yell (1983), achieving major commercial success and double-platinum sales in the US. His eighth and most recent album, Kings & Queens of the Underground, was released in 2014.